I would not consider myself a knowledgeable basketball fan. I barely know all the rules of the sport, much less all the history of trades/player stats/franchises/etc. But I enjoy watching the Orlando Magic [since I’m at school in Orlando] and if I happen to catch a Miami heat game [since I’m from Ft. Lauderdale], I’ll half pay attention. 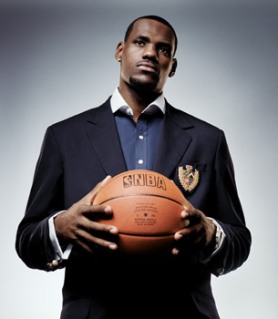 That said, I know nothing about LeBron James, other than the fact that he played on the Cavaliers and is considered a “very good” basketball player. I also know that for some reason he garnered a 1-hour prime time special last night – all proceeds going to the Boys and Girls Club, which was pretty generous – and I watched, curious as any other quasi-fan to see where he would end up.

He chooses the Miami Heat, blah blah – and the reporter, mid-interview, cuts straight to video of “fans” burning LeBron’s jersey. No warning to Mr. James, no thinking about how that could possibly effect him on what has already got to be one of the most tense moments of his life. No, apparently he needed to know RIGHT THEN that a symbol that literally represents him was being burned by people in the streets of his hometown. LeBron handled it very stoically, stating that he made the decision he knew would be the best for him and that he hoped the Cleveland fans would recognize the SEVEN years he put in for them.

Now, my rant is about these so-called “fans” who would burn the jersey of someone they claim to “respect” and are mad over him leaving them. If you are truly a LeBron fan, you would not be burning his jersey; you would be trying to find a LeBron Heat jersey as soon as you can, as he is THE SAME PERSON he was 10 minutes earlier, just now playing THE SAME SPORT on a different team. If you are strictly a Cavaliers fan, then you should still respect the fact that the man played for 7 years on a team you claim to be a fan for. People leave/trade/retire/quit teams all the time – and that’s one of the reasons I tend to like college sports better than pro sports. But that’s part of the game; it makes no sense that one should think, “Oh, there he goes, no longer playing for the Cavs; let’s forget he ever did and get rid of that shrine we built for him in our closet.” If you think you’re team is going to crash and burn that badly, then maybe you aren’t a *true* fan.

This is all coming from someone who isn’t that active a basketball fan, but definitely an active supporter in the movement against stupidity.